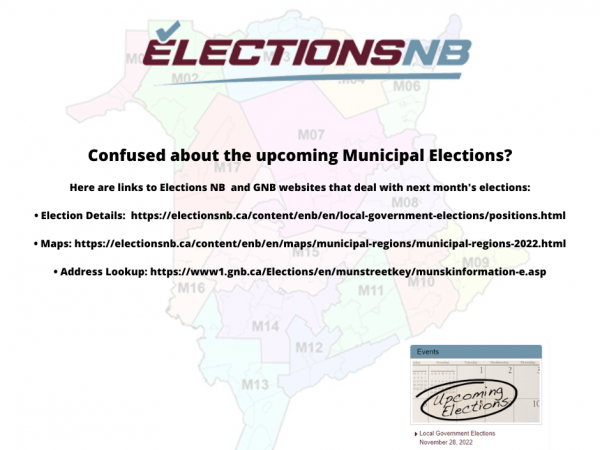 Please note that Entity 57, which includes the Town of St. Stephen WILL be having elections next month.

Here are links to Elections NB and GNB websites that deal with next month's elections:

A mix-up in the name on files sent to the vendor who printed the content and packaged the envelopes for Elections NB resulted in over 260,000 households being sent the wrong election message.

“The mistake, introduced after the files were sent to the supplier, was not caught by us during the proofing process,” said chief electoral officer, Kim Poffenroth.

Information about the Nov. 28 local government elections is available on the Elections NB website. In addition, Elections New Brunswick is publishing an insert next week in all the daily newspapers and flyer bags, delivered to people’s homes, indicating where elections are taking place and all of the positions up for election.

“Voters who live in areas having an election will be sent voter information cards by us in mid-November, indicating when and where they can vote,” said Poffenroth.

The communities listed below are NOT having elections.

They were either not impacted by the municipal reform or the number of voters in the local government increased by less than 15 per cent.

Residents in the rest of the province, including those living in unincorporated rural areas, WILL have some form of election.

Elections New Brunswick has a call centre open now to answer questions from voters or candidates about the November elections and to allow people to update their voter information. The call centre will be open Monday to Saturday and can be reached at 1-888-858-8683 (VOTE). 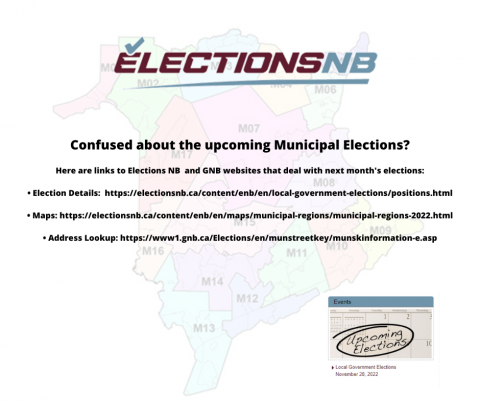